Since moving to South Korea in October of 2007, friends and family of mine back in USA have often asked my thoughts, or how I felt.

My response: "What do I think about WHAT?" And that is legit confusion, followed by them explaining the recent threats made by North Korea. "Oh. huh. That's interesting. I'll ask my Korean friends."

"So," I say to my Korean friend, "what do you think about the stuff North Korea recently said?"

"What did they say?" my Korean friend responds. 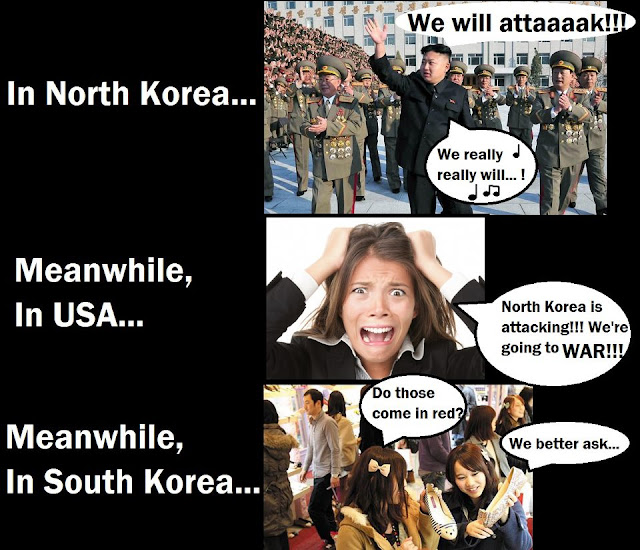 You see, North Korea has been provoking the south and poking the strength of the armistice since it began. Nothing they say or do really changes. It's all the same. If the Korean people choose to care and worry about everything the north says... they will not be able to live their lives.

North Korea has every reason to make threats, and next to zero reasons to actually carry them out. So why do they make threats? They do it to make money. The nation is incomprehensibly poor. The people are starving. South Korea and USA and other nations provide aid and income, especially in return for seeing North Korea taking steps away from the threats they make.

The truth is - North Korea has become an expert at scare tactics and scams. In reality - they have a dictator-led system of people in power who want to keep their power. Actually going to war is counter productive to keeping their power and maintaining a life of luxury. It would make very little sense to do anything to actually start a war.

To rattle a Korean from the south, the north will literally need to attack and take lives, and that itself doesn't even guarantee any kind of life-changing stress. It would depend on where they attacked and how many people died as a result. Read through this list of provocations since the 1960s, IF YOU DARE.


A timeline of North Korea's major provocations since the 1960s:


April 27, 1965: Two North Korean MiG-17s attack a U.S reconnaissance plane above the Sea of Japan. The aircraft is damaged.


Jan. 17,1968: A unit of the North Korean army disguised as South Korean soldiers crosses the DMZ in an attempt to kill South Korean President Park Chung Hee. The assassins make it to Blue House, the official residence of the president, but are stopped in a firefight. Twenty-eight members of the unit are killed.


Jan. 23, 1968: The U.S. Navy ship the USS Pueblo is boarded and captured, along with its crew, by North Korean forces in the Sea of Japan in North Korean waters. One sailor is killed in the attack. The 83 other crewmembers are held until Dec. 23.


Oct. 30,1968: A wave of more than 100 North Korean commandos begins landing on the northeast shore of South Korea to wage a guerrilla war against the South Korean government. A total of 110 commandos and 20 South Koreans are killed.


April 15,1969: A U.S. reconnaissance plane is shot down off the North Korean coast, killing 31 Americans.


May 1992: Three Northern soldiers in South Korean uniforms are killed in Cheolwon, Gangwon-do.


May 1996: Seven North Korean soldiers cross into the DMZ but return after warning shots are fired.


June 1999: Several clashes between North and South Korean vessels take place in the Yellow Sea near the border between the two countries.


Oct. 9, 2006: North Korea conducts its first nuclear test, in violation of international agreements it has signed.


May 25, 2009: North Korea conducts a second nuclear test, in violation of a U.N.Security Council resolution.


Nov. 10, 2009: Naval vessels from North and South Korea exchange fire near the border.


Dec. 12, 2012: North Korea fires long-range missile and says it has launched a satellite into orbit.