So why choose "waygookboon" for this blog's web address?

The short answer: It's the polite way to say "foreigner" in Korean. Here's the breakdown. 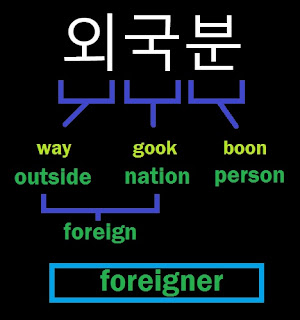 When you walk in certain areas of Korea, it's much more common than you might think to hear someone say, "waygookin!" or "waygookboon!", the casual and polite ways of saying 'foreigner', respectively. Korea is largely an insider nation, and there is a social-philosophic and historical significance to having Korean blood. Sometimes referred to as The Hermit Kingdom, Korea is well known to resisting foreign influence as much as possible. 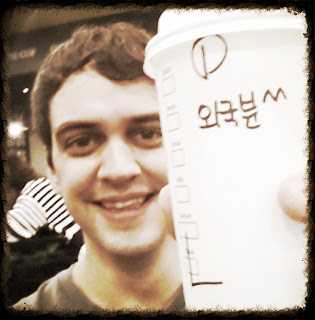 I happen to have this picture. One day, I met some friends at a Starbucks in Gangnam, Seoul. I ordered my latte, and when I got it, I noticed the Korean writing on the side, which says "waygookboon". I was so amused, I had to take this picture to commemorate the occasion. After ordering my coffee, they actually wrote "foreigner" on the side of the cup so they could identify me... followed by the smiling eyes. I'm sure they did it because they assumed I wouldn't understand the Korean when they call out the name of the drink or my order number - so it was innocent... but very amusing, nonetheless!

There's also a standing joke with the Korean girl I'm dating. When I do something innocently outside of the cultural norm, here, she'll playfully accuse: "You foreigner!"
Posted by Unknown at 6:43 AM