As I travel abroad and meet people from nations all over the world,  do you know what those people generally think about us? Recently I've heard:

So often, when my home country does something, people or government, I get questions about "why" that I don't know the answer to. "Why do Americans do this?" and "Why does the government do that?" So naturally, my default answer is, "Because America is the best country in the world!"

Don't worry. I'm being completely satirical when I say this. It's a joke, a way of poking fun at myself, my people, my country.

But do you know what? I actually want to say that Americans and Koreans have quite a lot in common, in this regard. Only Korean people are less outspoken about it and since the national language is not English, a lot less of what they do say actually gets translated for the rest of the international community to learn about.

Korean people are very proud of their history, country, and  ancestors. They are also opinionated, passionate, and think their way is the best.  Korean people are perhaps the most patriotic people I have ever met, and it is reflected in their government, culture, flag, and anthem. As one line in the chorus of the national anthem goes,

I have met many foreigners in Korea who have expressed surprise at the amount of patriotism among Koreans, but the roots of the patriotism are deeply embedded in so many aspects of life, here, and that fact has been a great contribution to their strength and resilience as a people for so long. I'd like to add that this patriotism and nationalism are still being very strongly pressed into their children, today. 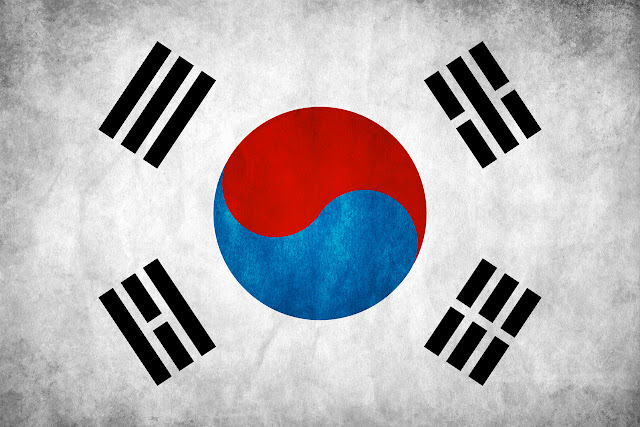 Korea is well known for its isolationism. The Korean people were not welcoming to new foreign peoples, and have been slow to change in that respect.

Despite being an ancient people, they had little interest in creating a flag prior to the late 19th century. The Korean flag was first officially adopted in 1883, and then dissolved under Japanese occupation, but re-adopted near the end of Japanese rule.

The Korean flag is known as "Taegeukgi" ("Dae-gook-ghee"), and it represents long standing Korean ideals and philosophy.

The white symbolizes light and purity, and represents the Korean affinity for peace.

The circle in the center that is divided equally into a blue portion below and a red portion above represents two cosmic forces, equal and opposite. It symbolizes universal harmony in which the passive and active, the masculine and feminine, form the whole.

The black lines, trigrams, surround the circle, and represent several things each.

Now, imagine that the center circle is spinning, as though passing through the four phases. Altogether, the flag represents universal harmony and the ideals of the Korean people.

I actually love the Korean national anthem. It is such a beautiful song. Unfortunately, I searched YouTube for a video that shows how beautiful it is, and I really couldn't find one good enough. But of the ones I saw, below is the one I liked best.

The title of the Korean national anthem is "Aegukga" (Aa-gook-gah). It means "The Patriotic Song".

Here are the lyrics in English:

Until that day when
Mt. Baekdu’s worn away
and the East Sea’s waters run dry,
God protect and preserve our country!
Chorus:
Roses of Sharon and Three thousand Li
of splendid rivers and mountains full;
Great Korean people, To the Great Korean way
stay always true!
As the pine atop Namsan Peak stands firm,
unchanged through wind and frost,
as if wrapped in armour,
so shall our resilient spirit.
The Autumn skies are void and vast,
high and cloudless;
the bright moon is our heart,
undivided and true.
With this spirit and this mind,
let us give all loyalty,
in suffering or in joy,
to the country’s love.

http://www.nationalanthems.me/south-korea-aegukga/
Posted by Unknown at 8:31 AM