Years ago, I began watching Korean movies as a way of immersing myself more in the cultural mindset. Then I moved on to Korean dramas. The ones I watched were mostly pretty good. But it was the time when a buddy of mine recommended and provided one of the most classic Korean dramas that I stumbled upon...


Now, this Blog Post is NOT about this drama. The drama is just to illustrate what THE Korean Love Story is.

This Drama was called Full House. 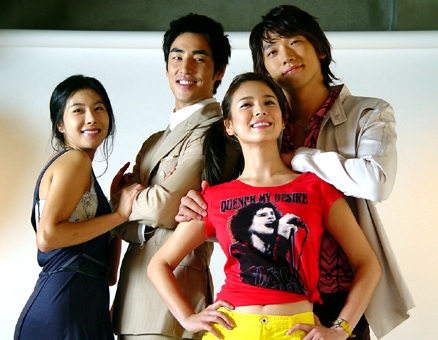 It started off nice, but soon fell extremely sour; and the moment I could predict the ending, I decided that this is the worst of all the Korean dramas I'd seen. (Up to that point, I had seen just 5 others, though.)

These are the characters.

3. Supporting Character - Hye Won: Famous fashion designer. Makes Young Jae's clothes. Knew him since childhood. Thinks of him as a little brother. Is in love with the other guy.

In the drama, the poor writer girl gets stuck in a pretend marriage with the famous movie actor.

The ENTIRE show... he does nothing but act like a complete jerk, insulting her, and working her like a slave. In the midst of this, the rich director is falling in love with the poor writer, the poor writer is falling in love with the movie star, the movie star loves the fashion designer, and the fashion designer loves the director.

The director is a perfect gentleman and never does anything wrong in the show. He is everything a woman should want in a man... and yet, the drama is written so that, eventually, the poor girl and the movie star choose each other, and although the rich director does absolutely everything right... she rejects him, in the end. 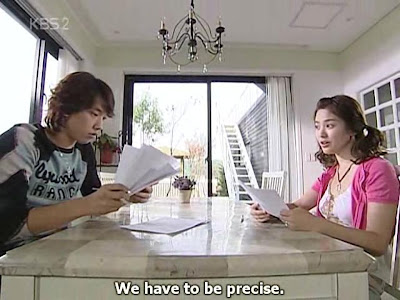 So I began to hate the show. WHY does she choose that guy??? I began to investigate by asking some Korean friends - and that's when I was introduced to... 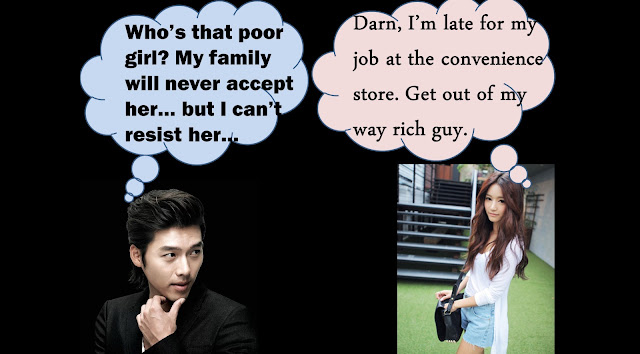 The first part of THE Korean Love Story is that a rich and handsome guy must fall in love with a poor girl. This is a straight-up cookie-cutter HIT in Korea. Countless dramas follow this story line. Of the 7 popular dramas I saw, 3 of them did!

The second part is the ideal that one person can change another person through their love, and make them better than before. In this example, although the movie star was a jerk, the most romantic aspect is that love between the two is able to change him.(For me... that's not at all romantic. haha)

Now they live a fabulously rich life together, happily ever after.

And did I mention... they're rich? Don't underestimate that value in Korean culture. It is all of serious, unrealistic, and comedic.


Reader's Response: An Explanation of
THE Korean Love Story.

A Korean blog reader commented with a very insightful explanation as to why this story is so tossed about in Korean romance.

*"I think that is because of the history. Richness was like their savior but it was evil and Koreans were poor, innocent, and good. Koreans experienced extreme poverty followed by war. My parents' generation suffered from hunger right after the war (my father spent his early life even without electricity). And before the war, my grandparents' generations were under Japanese rule and suffered like slaves, experiencing life threat. (*We hear this alive very closely).

Anyway so they lived to become rich. They were desperate, and they conquered it so fast. I believe these things have power to affect today's generation."

[*"We hear this alive very closely" - I'm not exactly sure about the intended meaning. But I think it means that this sentiment is held very close and passed on to younger generations even today.]